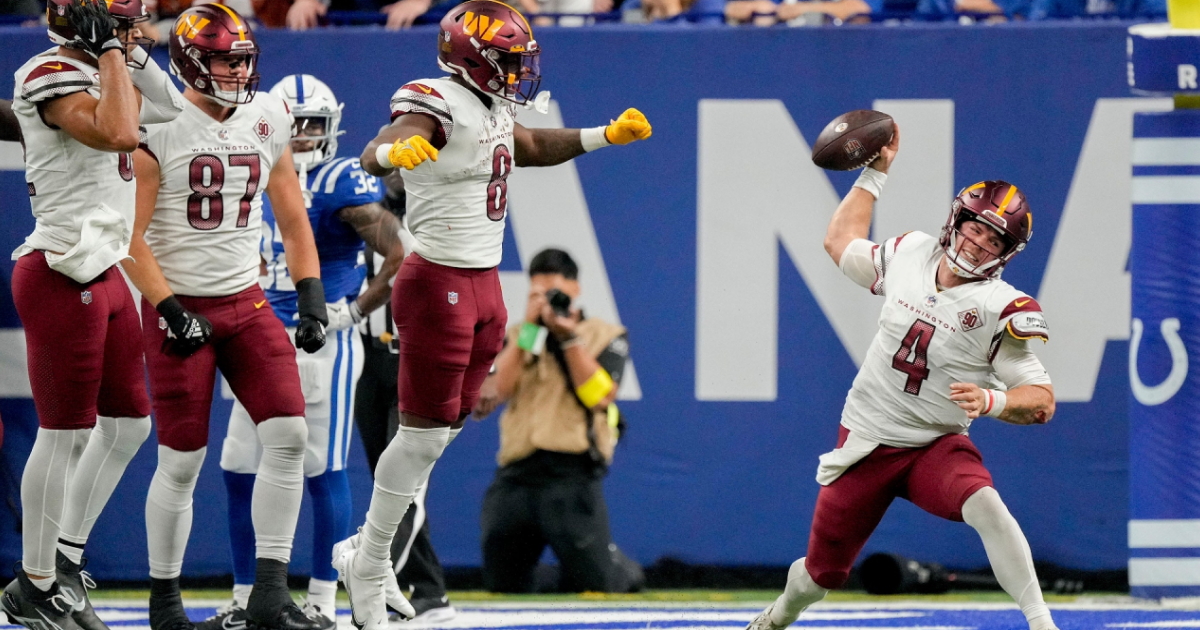 The Washington Commanders were able to come away with their third straight victory Sunday in Indianapolis. To get that win, the team had to make a ten-play, 89-yard drive that lasted 2:17 seconds and ended with quarterback Taylor Heinicke rushing for a one-yard touchdown and spiking the ball.

For fans of the burgundy and gold, this one turned out to be a nail-biter that will be remembered as one of the great comebacks.

Like most of the Washington offense, Heinicke wasn’t having a very memorable day before the last two drives of the game. In fact, Heinicke threw an interception at the 12:32 mark in the fourth quarter to Indianapolis LB Shaquille Leonard that almost sealed the win for Indy. The Colts scored four plays later and led 16-7 with 11:07 left in the game.

From that point on, Heinicke was 12-14 for 151 yards passing and a touchdown across the final two drives. Those final two drives also included two fourth-down conversions, one of which doesn’t get much more clutch than Heinicke was. Arguably the best play of the game came with 41 seconds left on the clock as Heinicke hit Terry McLaurin with a 50/50 jump ball that McLaurin was able to go up and take away from Colts DB Stephon Gilmore.

The play went for 33 yards, giving Washington the ball at the one-yard line, and after they called their second timeout, it left them with 26 seconds in the game. Heinicke scored on the next play.

Lost in the mix of things was the play of Washington’s defense, who, despite not having top tackler LB Cole Holcomb, only gave up 324 yards on the day, caused two turnovers, and came up with a clutch three-and-out series in the fourth quarter that set up the final game-winning drive.

Not to mention the final drive in which they were able to keep Colts WR Michael Pittman in bounds, so they were forced to use their last timeout and only have one chance at the end.

The victory is the third straight for Washington, who now finds themselves at 4-4 and in last place in the best division in football currently. The Philadelphia Eagles have yet to lose a game, while the Dallas Cowboys and the New York Giants both have 6-2 records.