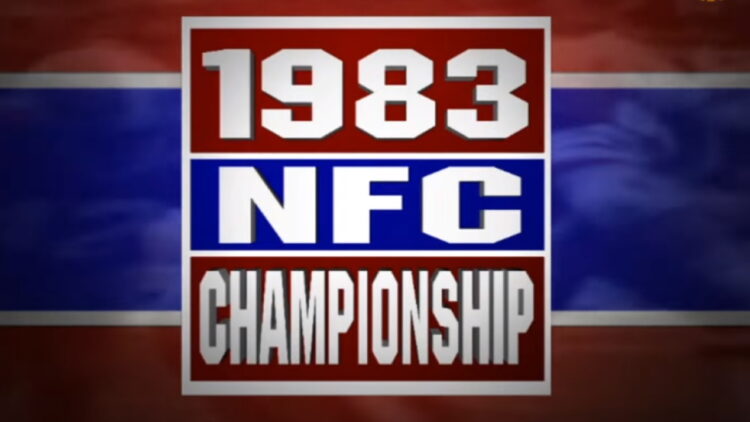 The 1983 NFC Championship Game is a game that time has forgotten. On that day, January 8, 1984, the San Francisco 49ers traveled west to RFK Stadium to take on the defending Super Bowl Champion Washington Redskins, who, without doubt, were the best team in football during the 1982-83 season. A year in which Washington quarterback Joe Theismann would go on to win the NFL’s top individual award as the MVP of the entire league.

The game was a tough one for Washington kicker Mark Moseley, who missed four field goals. It was also a hard pill to swallow for several 49ers. “The invincible Redskins had six plays from in close, and they still couldn’t get it in at the end…they needed help from the officials,” said 49er Hall of Famer Ronnie Lott. Lott had an interference penalty called on him in the third quarter, which set up the Skins’ second touchdown. He also had a holding penalty called on him with two minutes left that set up Mark Moseley’s winning field goal. That penalty burned a minute off the clock when San Francisco was desperate for time and cost the 49ers their last two time-outs. “I don’t think the officials were very precise. All three calls were incorrect,” he said.

“Right now I’m a little bitter about the officials. It’s just too bad that a championship game’s decided by a call that close,” added 49ers coach Bill Walsh. “I’d rather lose by the Redskins driving for a touchdown than on a call so close.”

“It’s the nature of the game now,” said former Giants and Redskins linebacker Sam Huff, who did radio broadcasts in Washington in those days. “These are the rules; this is the way they want it to end up. They’ll call the least little touch downfield, but offensive linemen can strangle people and get away with it. What was there, one offensive holding penalty called out of 75 passes thrown?”