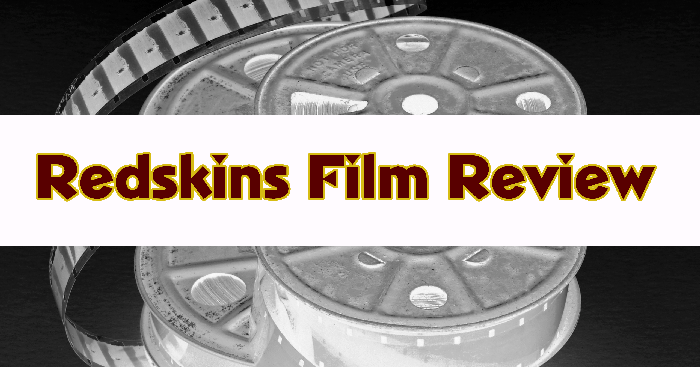 This will be the first in a series of post’s using the “All-22” Coaches Film from NFL.com to help visualize certain plays and formations and analyze the situation.

Last Sunday when the Washington Redskins traveled to Oakland to take on the Raiders they had the worst thing that can happen to a special teams unit occur. The hated blocked punt that was recovered for a touchdown.

After looking at the tape, Perry Riley and Jordan Pugh didn’t react to how the two Raider defenders crossed each other on the left side. As running-back Rashad Jennings cut inward (and in front of Stewart) after being lined up on the outside, and fullback Jeremy Stewart lined up on the inside but cut back (behind Jennings) to the outside. Look below for pictures of the play (click on the images for a broader view). 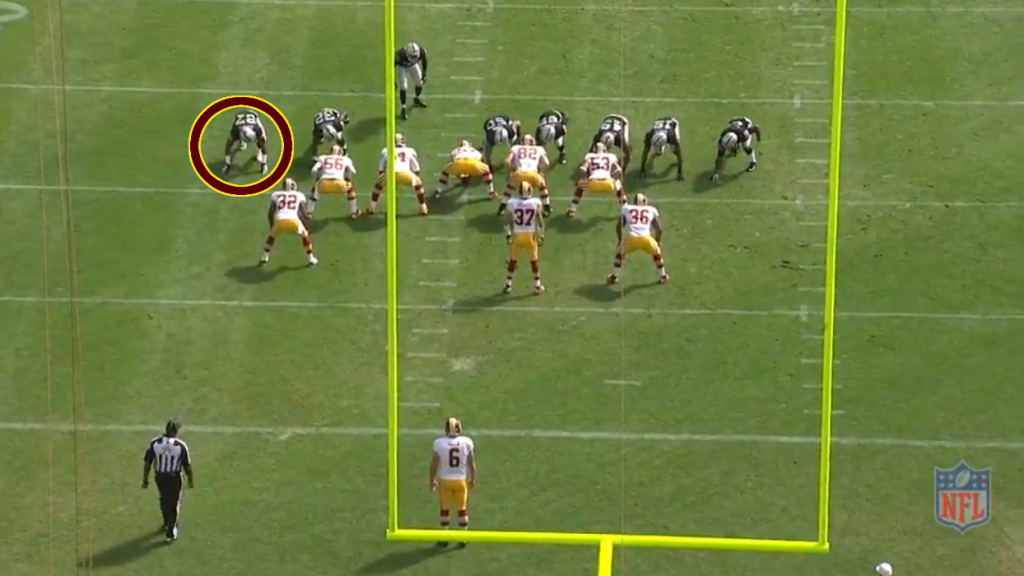 Jennings is the player that is circled as he is the Raider defender who actually made the blocked kick.

As you can see Jennings is lined up to the outside. 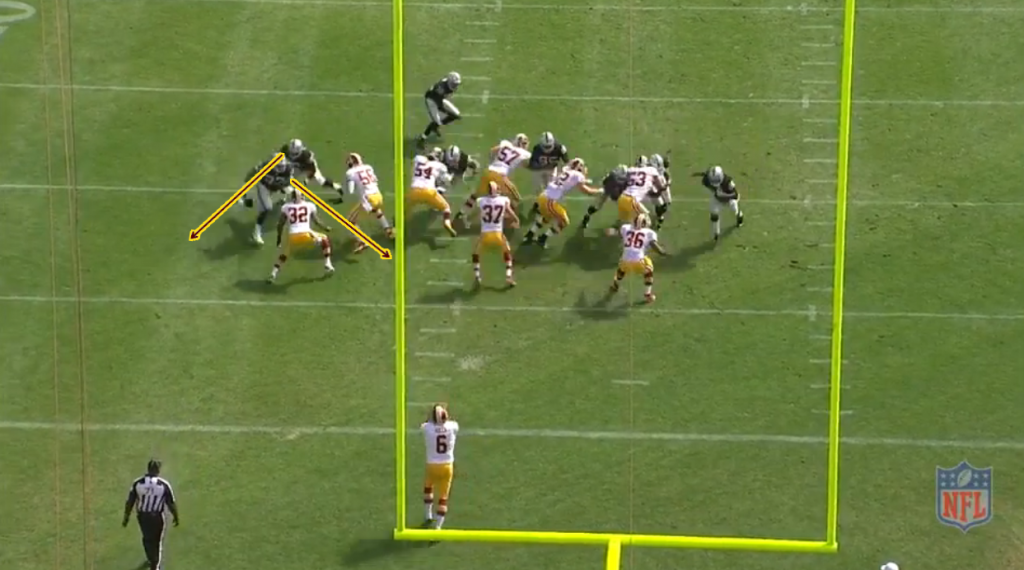 As the play starts to develop, you can see Jennings cut inward and in front of Stewart on the line.

At the same time, you can see Stewart cutting to the outside but behind Jennings. 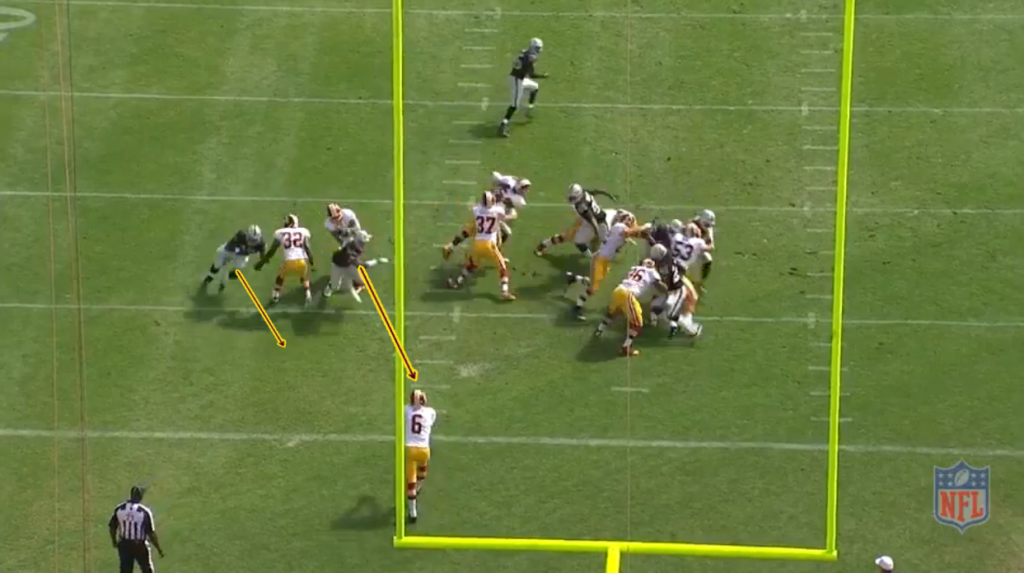 As you can see Jordan Pugh (#32) is still standing pretty much straight up as both defenders go by him on each side, and Perry Riley completely missed on his assignment as well.

Riley admitted after the game that he was confused while trying to defend a stunt on the play. 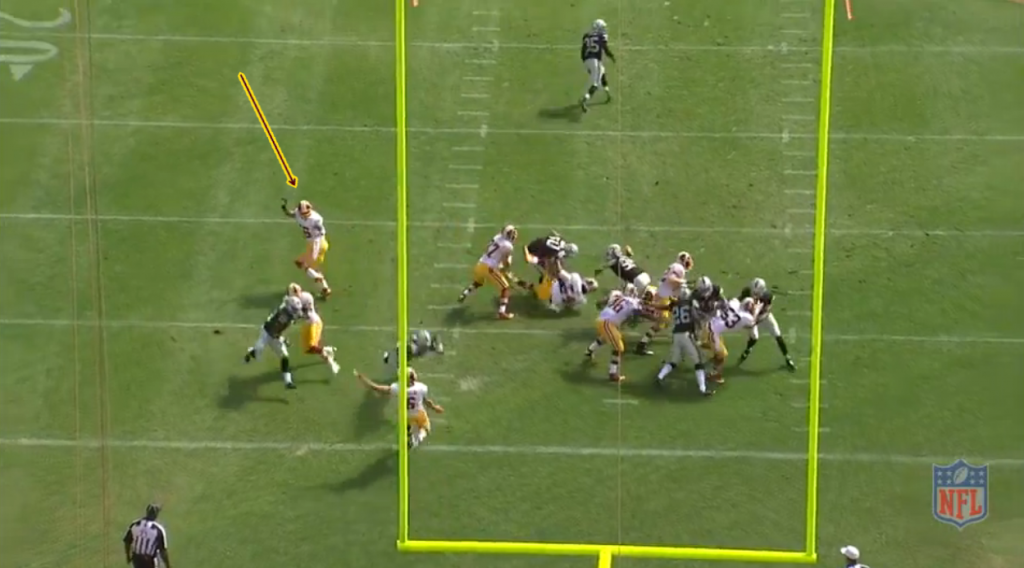 As the punt is being blocked Riley releases and appears to throw his hand up, which pretty much shows he knew the play was busted and was trying to get punter Sav Rocca’s attention to throw it to him. Of course, this all being in a split second of time Rocca never saw any of that and went through his normal progression and Jennings got the block in which Stewart recovered for a touchdown.

Previous Punt in the Game 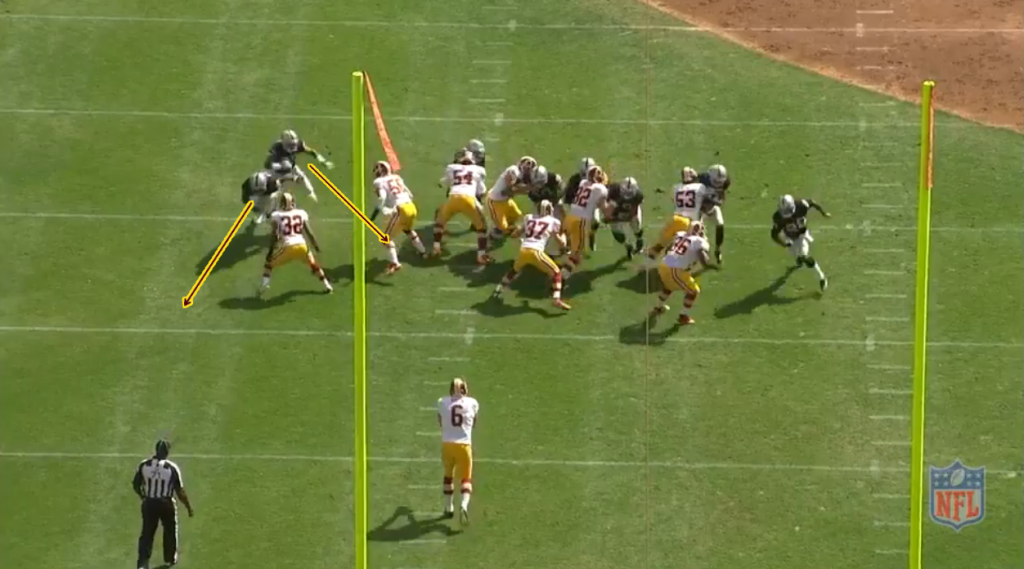 On the previous series, the Raiders did something similar except completely opposite, which likely led to Riley’s confusion on the blocked punt play. On this play, Jennings cut inside, but this time he cut behind Stewart, who slipped and fell as he was shifting inside and in front of Jennings, which basically slowed the effect of confusion for Riley as well but set him up on the next series to be tricked.

After the blocked punt the Raiders didn’t attempt to come at Sav Rocca in the same way again until the fourth quarter. 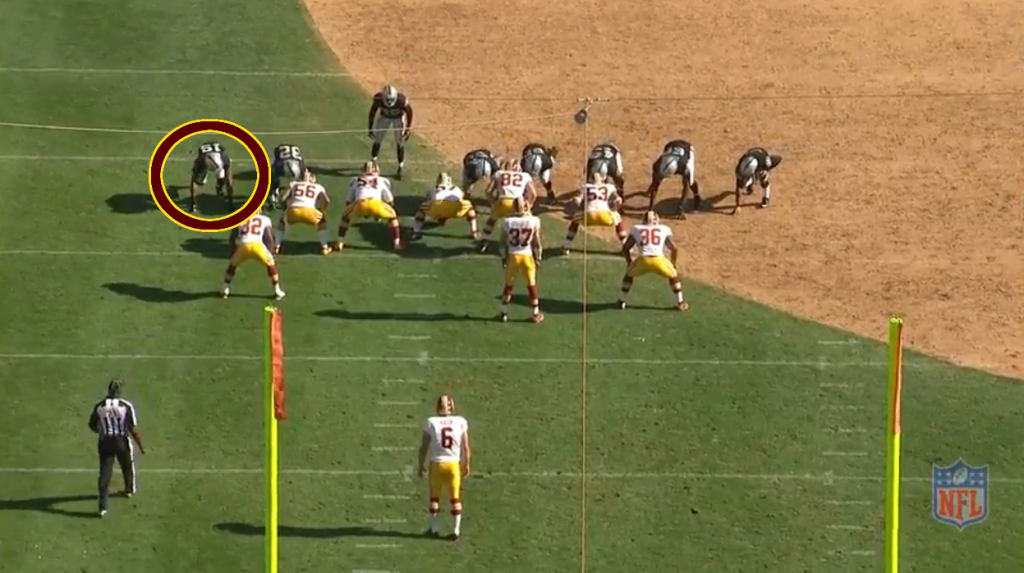 Again, since Jennings is the key player in the block attempt, he is circled. 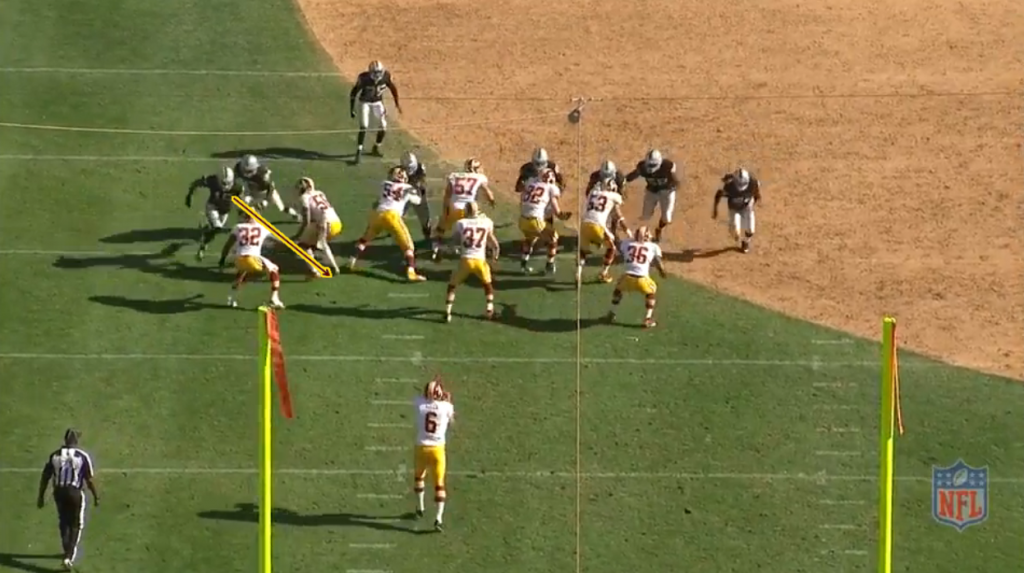 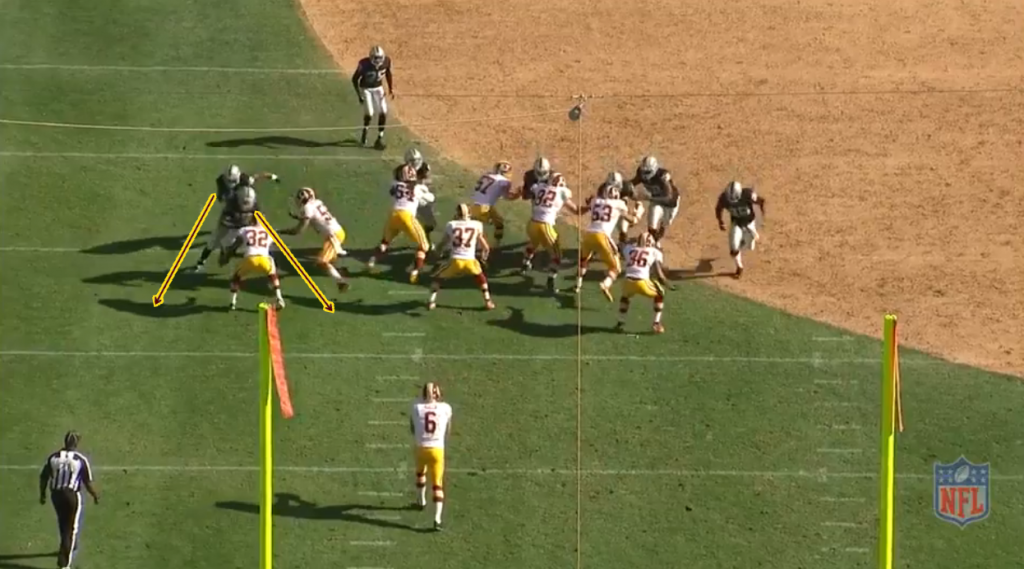 As you can see Jennings cut inside and in front of Stewart as Stewart cuts to the outside but behind Jennings (same line stunt as before). 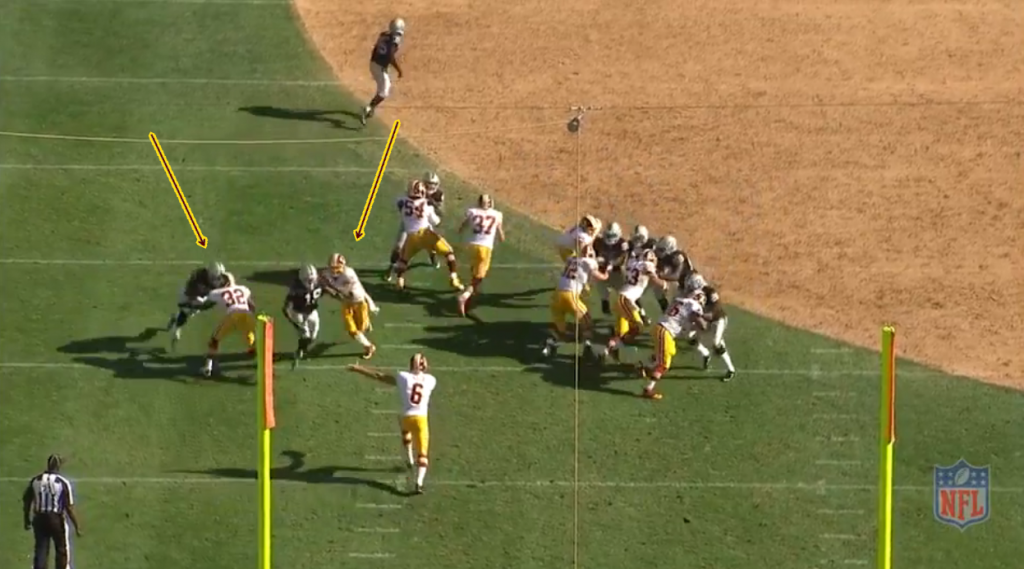 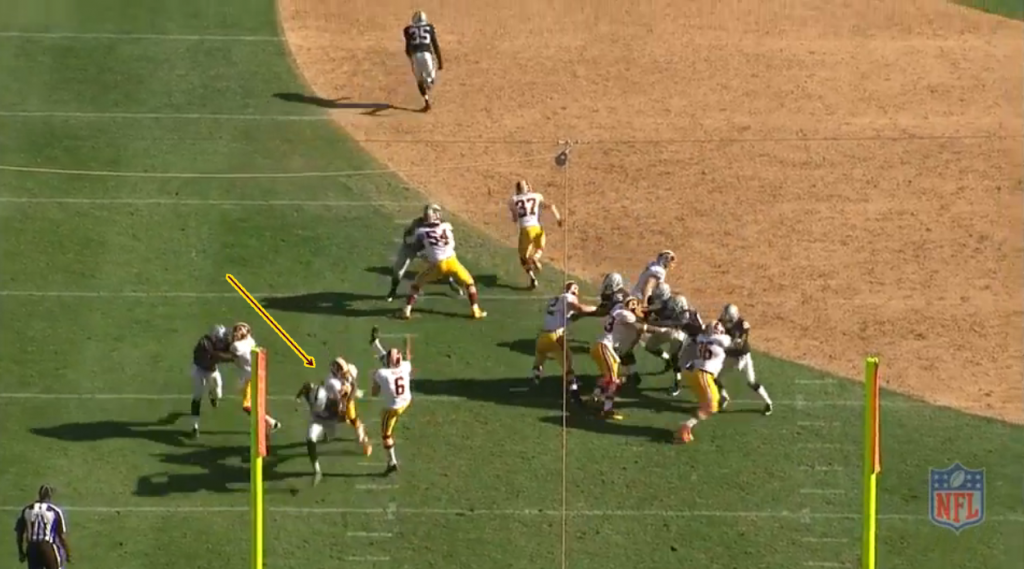 This time Riley and Pugh were both aware and ready for what the Raiders were doing and blocked Jennings and Stewart to the outside.

The special teams is very much a work in progress under first-year special teams coach Keith Burns. Burns had this to say after the game, “The biggest thing is it’s always a work in progress,” Burns said. “You’re dealing with a lot of young guys, you’re changing guys in and out. But at the same time, we’re not where we want to be, but we’re improving.”

Let’s hope the improvement shown in-game in this situation rolls over to the rest of the season, a blocked punt changes a game 100% immediately and will more often than not lead digging a hole for any team, much less one that has had its fair share of struggles like the Redskins this year.