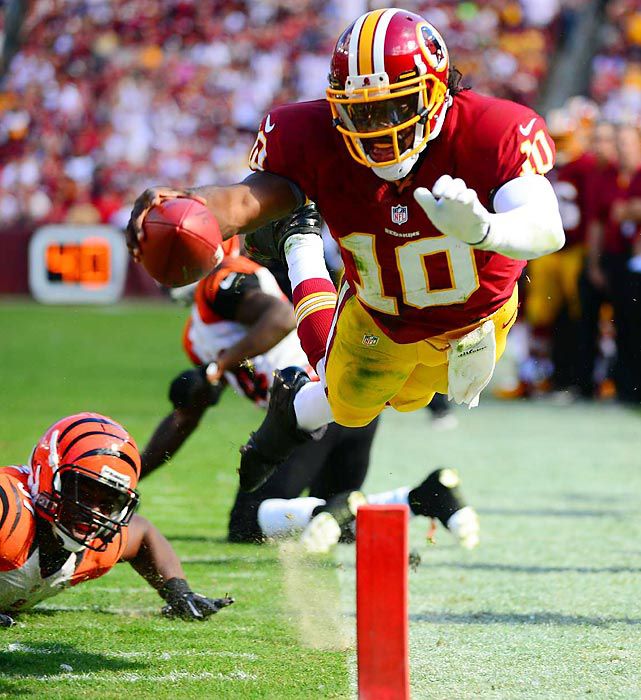 RG3 Confirms Progress, Speaks on Who’s to Blame for his Injury

Robert Griffin III sat down with Redskins Nation in an exclusive interview to discuss his injury, his rehab process and once again discussed the blame game on his injury.

“You always want people holding you back,” RG3 told host Larry Michael on Wednesday’s program, referring to the team’s medical staff needing to limit how hard he pushes himself during rehab sessions. “You don’t ever want to have people pushing you forward.”

Although RG3 did not say exactly where he is in the rehabilitation process, he did confirm recent reports from surgeon James Andrews and Coach Mike Shanahan that his recovery is going very well and that he’s way ahead of schedule.

“That’s what they’re doing right now; they’re holding me back from doing certain things because I feel like I’m ready, my body might feel like it’s ready, but according to the timetable, I’m not ready,” he said.

RG3 was also asked about the controversy that came from a text he sent to ESPN’s Trey Wingo last month. In the text message, Griffin said, “I know where my responsibility is within the dilemma that led to me having surgery to repair my knee and all parties involved know their responsibilities as well.”

Many within the national media took that as a shot directed at the Redskins brass for the way it handled the situation, both during and leading up to the injury.

“You try to avoid controversy as much as you can, while at the same time, making sure people understand that, everyone understands what happened in this organization, when it comes to owner, GM, head coach, myself and offensive coordinator,” Griffin said. “We all understand what happened …in the Seattle Seahawks game that led to my knee surgery. At the end of the day, what anybody wants to say about who’s to blame, whose responsibility it is. It doesn’t really matter who’s responsibility it is. It doesn’t really matter who’s to blame because I’m the one who has to go through the struggle that is a knee surgery, and rehab to get back. The people who are also going through that with me are the owner, the GM, the head coach, the offensive coordinator, the organization, the fans. Everyone goes through that with me.”

Griffin went on to say, “At the end of the day, you just want people to know that, look, just pray for me. Forget about that game. It’s in the past. We’re moving forward. And just know that, I need those prayers, I need that help to help me get through this. Rather than people coming to me trying to start a controversy over ‘he said, she said’ or who’s to blame.”