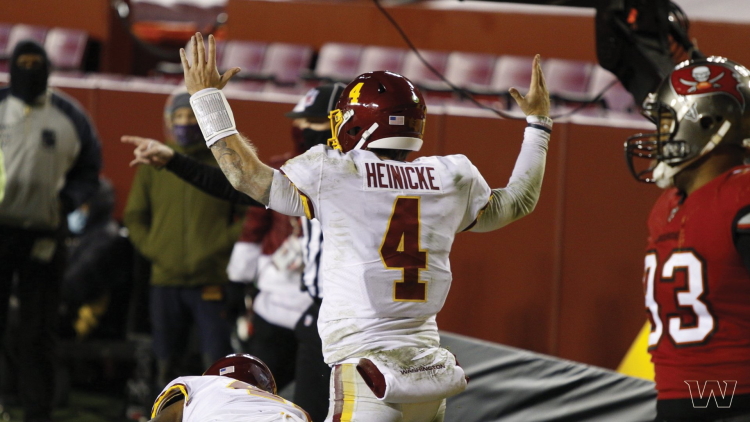 The Washington Football Team is a franchise in flux at the quarterback position this offseason. This week began with only Alex Smith and his non-guaranteed salary of $18.75 million ($24.4 million cap hit for 2021) on the roster at the most important position. Rumors and reports have been floated for weeks that the team is actively pursuing all possibilities at the position, including everything from trading for a veteran, to moving up in the draft.

Wednesday morning, the team made their first move of the offseason when they re-signed Taylor Heinicke to a two-year contract reportedly worth up to $8.75 million with incentives (look at Tweet below for full details).

Washington will likely still be in the QB market this offseason. But this is an important domino and a very cool story. This deal was negotiated by @chriscabott of @SteinbergSports, who also recently negotiated extensions for Patrick Mahomes and Jeff Wilson. Now, Heinicke. https://t.co/epW8F272aO

The rest can be earned in bonuses/incentives, for a max value of $8.75 million. pic.twitter.com/Fy6rFnGJL7

Heinicke spent most of last season without a team and attending online classes at Old Dominion University. He was signed to Washington’s practice squad in December as the ‘COVID QB’ just in case one of the other quarterbacks on the roster was injured or had a positive COVID-19 test result. Heinicke was able to seize the opportunity when Alex Smith couldn’t play because of a calf injury and started the playoff game against Tampa Bay, going 26-44 for 306 yards passing with a touchdown and an inception against the eventual Super Bowl Champions. Taylor also added six carries for 46 yards and a touchdown on the ground. The reality of the situation hasn’t completely set in for Heinicke yet.

“It still really hasn’t hit home yet. Even the game, I’m still kind of processing everything that happened because things changed very quickly in a short amount of time. A lot of things are happening right now. I’m a little bit overwhelmed, but again, we have some time to kind of soak it all in and get ready for next year.”

It is highly possible Heinicke could have garnered some attention on the open free-agent market, but he was not in the least bit interested in finding out. This was probably the best move for both him and the team, as his abilities fit offensive coordinator Scott Turner’s system perfectly. Even if he ends up being a backup, the team could do much worse at the number two spot on the depth chart.

“I wanted to be in Washington. Again, just the familiarity with Coach Rivera and Scott Turner. Scott’s really the one that kind of got me into the league. He was the only quarterback coach that came to my Pro Day. He was the one that brought me to Minnesota. He brought me to Carolina. He’s always kind of believed in me. I want to be loyal to him. He’s gotten to this point, and I want to stick with him. I think it’s a pretty special thing we’ve got going.”

It is hard to argue that Heinicke looked extremely good against the Buccaneers in January’s wild-card game. The one negative about Heinicke that stands out to most (including myself) is that he’s been injured in both of the games he started as an NFL quarterback. That’s a major red flag that even Taylor has recognized and wants to work towards removing in the near future. He’s focused on improving this offseason, including putting on some weight to be more durable.

“I think the one alarming one, obviously, is that the two starts I’ve gotten kind of injured. So, be more durable, put some more weight on. That’s one big thing. But the biggest thing at quarterback is just being consistent. You can’t have one good game then be off the next two. You have to be consistent. That’s what makes quarterbacks great. That’s what wins games. When I go out there and train, I try to be perfect, complete all the balls, put them all where I want them to be, have my feet on time and stuff. You work on the same things every year; you just try to get better at it and polish it up.”

While signing Heinicke adds another player to the roster that can possibly start in 2021, it doesn’t end the ongoing search the team is in at the position. Rivera and company are concentrated on getting more from the quarterback spot, and the offense overall, in 2021. Don’t be surprised if that includes signing Kyle Allen back into the mix (he’s currently recovering from ankle surgery) and bringing in another veteran via free agency or trading for one. Don’t forget about Alex Smith, who will likely be released, but is still currently in the mix. Heinicke himself realizes that going into next season; he’ll have to compete for the starting role.