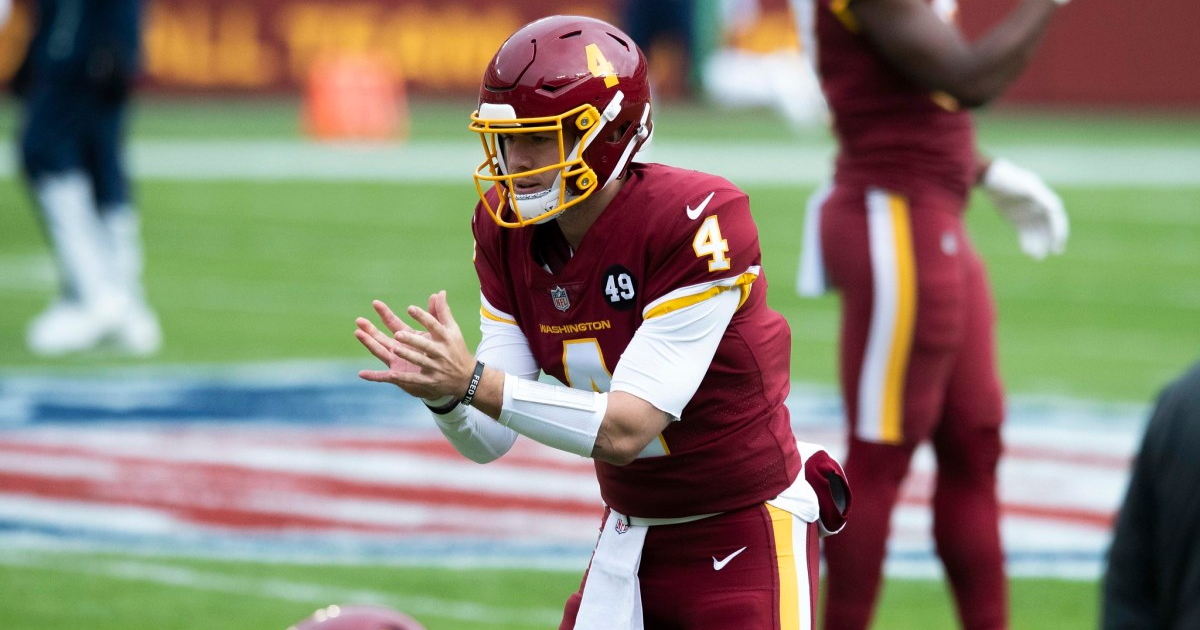 The Washington Commanders currently find themselves in a predicament with starting quarterback Carson Wentz out with a broken finger in his throwing hand. Wentz will miss the next four weeks, according to several sources. Unfortunately, that leaves Washington in a situation their coaching staff should be familiar with after last season.

This year, of course, is a different season with a completely separate set of problems that include an offensive line that hasn’t played up to snuff or been able to stay healthy along the way. But the coaching staff is again forced to give the reins to QB Taylor Heinicke, who took his benching following last season like a true professional. Taylor has also been helping rookie Sam Howell this season during his progressions as a first-year QB in the National Football League.

Terry on going back to Taylor. pic.twitter.com/UGmkR0kTQw

The offensive line issues may be something Heinicke can help with as he brings a different dynamic to the position for Washington with his ability to move around the pocket and scramble for first downs when needed. The weapons Washington has on offense are a huge upgrade from what Heinicke had last season, and all have that YAC (yard after catch) ability that can lead to big plays. Unlike Wentz, Heinicke isn’t known for having a big-time arm to make the long throws downfield, but he knows the playbook, is well-liked in the locker room and motivates his teammates.

Asked if he understood why Washington went with Wentz as the starter Heinicke didn’t hesitate to give his opinion at his Wednesday afternoon press conference.

“Yeah, I understood it, and I get it. You’re always looking for the next best guy in this league, and that’s the only way you get better. So, I understood it, I accepted it, and I just kept working hard, and that’s the only thing I could do. That’s the only thing I could control. So again, you know, throughout the whole off-season, I was like, I’m going to prepare like I’m starting because who knows what’s going to happen. The NFL’s crazy game a hundred percent, the people in the NFL get hurt at some point. So again, it’s unfortunate that Carson got hurt, but here we are, and you know, I’m excited to go play.”

Last year, Heinicke was in an offense lacking weapons, with Curtis Samuel injured, and Terry McLaurin constantly double-teamed. This year the team added Jahan Dotson and has Samuel back healthy, along with McLaurin and an improving Dyami Brown.

Heinicke also spent time this offseason with “experts,” who were geared toward trying to work with him on different ways to lift and turn his body to improve his arm strength. So that’s something to keep an eye on in the coming weeks to see if there’s any improvement in that area. More than likely, Washington Head Coach Ron Rivera and Offensive Coordinator Scott Turner will turn to the running game and try to mix in play-action to make Taylor more effective. Last week the running back tandem of Brian Robinson Jr and Antonio Gibson started taking control of that Bears game late in the second half.

Sam Howell Will Be The Backup QB

Rookie QB Sam Howell will officially dress and be listed as the backup QB for Washington Sunday against the Green Bay Packers. Howell hasn’t suited up a single time this season and probably hasn’t taken many snaps in practice with two other QBs ahead of him on the depth chart for the entire season. Hopefully, the rookie can hold the clipboard and keep learning during this one.

At 2-4, Washington is down, but their coaching staff still believes they have plenty of football left to get their act together. If that’s true, the last thing they want on the field right now is a rookie still learning the process and speed of the game. The time to see what Howell has will only come this season once the team is out of contention for making the playoffs. Otherwise, expect Rivera and company to ride the Wentz train until the wheels fall off once he returns.

The team is expected to announce if Wentz will be added to the injured reserve by Friday. The staff wanted him to start his rehab process before assessing how long he may be out.